by wildcryptotoday
in Binance Coin (BNB)
0

The Travel booking website, Travala, has announced that it is now accepting Shiba Inu (SHIB) as a method of payment.

The travel company has announced in a tweet that its platform is now accepting memecoin SHIB as an option for payments.

Travala is a blockchain-based travel booking website that accepts a wide range of cryptocurrencies as a mode of payment. Binance, the number one crypto exchange by trading volume, backs the platform.

Besides crypto, users can also use traditional methods like credit cards for booking flights and hotels. Currently, the platform allows users to book over three million travel products worldwide.

On 2nd December, Travala held a community vote on their website to decide which crypto the platform should add next.

Users had the option of choosing between Shiba Inu and Floki Inu in this so-called “token battle.” There was also a reward for participating in the vote, as the website noted “ALL users who vote for either token will receive a share of $15,000 in AVA, which will be dispersed in accordance with the votes cast.”

The result of the vote was a win for SHIB with quite some margin.

Shiba Inu has now become the 77th crypto to be listed on the platform. SHIB’s rival memecoin, Dogecoin, was already added to the website earlier in the year.

“Congratulations to @Shibtoken for winning the token battle on Travala,” said the company on Twitter. “$SHIB is now listed as a payment method method on Travala.com to book over 3M travel products worldwide.”

Related Reading | Who Will Win the Race to The Moon: Shiba Inu, Dogecoin and HUH Token Launched

Shiba Inu has made immense progress in terms of adoption recently, and Travala accepting it is another step in support of it.

The popular crypto exchange Gemini also listed SHIB on its platform recently. Just yesterday, another exchange, Bitstamp, added the memecoin to its listings as well.

Here is a chart that shows the trend in the price of the memecoin over the last five days: 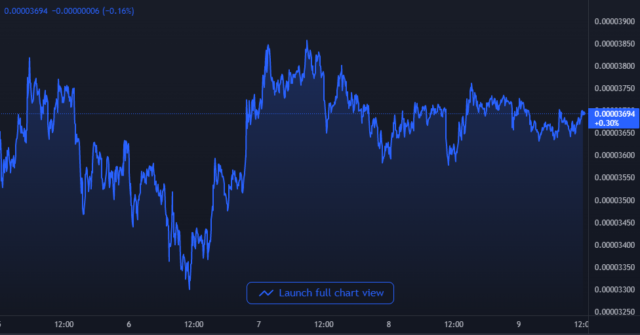 Bitcoin Climbs Back Past $19.5K Amid Fresh Hopes for a Fed Retreat; Binance’s Failed Plan to Boost the Price of Luna Classic

September Was a Busy Month for the #Binance Pay Ecosystem, with a Lot of Exciting … – Latest Tweet by Binance Coin