First, high electricity consumption of Bitcoin and Ethereum was a subject of debate in 2021. A report by PwC reveals that another blockchain network, Tezos, has shown improvements in power use. Such events can influence prices of cryptos in 2022.

Second, the cryptocurrency space is fast moving toward finding the real utility of blockchain projects. In a few cryptos, this utility is about gaming, and simultaneously earning. Play-to-earn is gaining traction, and the latter half of 2021 was more about NFTs, metaverse, blockchain gaming than about Bitcoin. The craze reflected in the higher-than-expected gains in these tokens.

Here are top five blockchain games that may continue their bull-run in 2022.

We know that Bitcoin’s dominance in the crypto world was challenged by meme currencies like DOGE and SHIB in 2021. If there is one cryptocurrency that emerged as a meme currency rival, it was the AXS token of Axie Infinity.

From literally nowhere in the beginning of 2021 to a multibillion-dollar cryptocurrency by the end of the year, Axie Infinity was on a wild ride. Much of the price appreciation can be attributed to the blockchain gaming craze. Axie Infinity allows users to breed creatures, named Axie, use them in combats, and even sell them by listing their holding on NFT platforms like OpenSea.

Axie Infinity is a complete ecosystem where metaverse’s virtual reality combines with gaming and token holding to reward users. Hundreds of million worth of AXS tokens trade in a matter of just 24 hours. Axie Infinity dwarfs the gains made by Dogecoin or Shiba Inu in 2021. 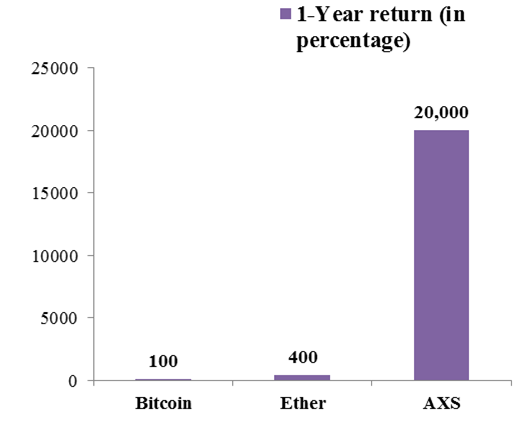 We know that Facebook might soon come out with its version of a virtual reality world where users can do a lot of things like building houses and offices and making friends.

Decentraland may already have delivered on this count. This Ethereum’s blockchain based platform is a place where users can buy a piece of land, and then create their own world, which can be monetized. The project was launched in 2017 after an initial coin offering (ICO) event.

Also read: What are DeFi games & which are the most popular DeFi games?

The metaverse world of Decentraland is made up of tens of thousands parcels of ‘LAND’. The project has NFT attributes as well. MANA is built on Ethereum’s ERC-20 protocol. NFTs, too, use Ethereum services. This means Ethereum’s token Ether may also find more usage in 2022.

Decentraland too has emerged from almost nothing in the beginning of 2021 to becoming a multi-billion dollar market cap crypto.

From Adidas to SoftBank, big names thronged to this virtual reality game in 2021.

The Sandbox helps users create a fantasy world and earn from their holdings. The concept is similar to the Decentraland’s metaverse, but both worlds have their unique offerings. The Sandbox is also an Ethereum-based project, with a linked SAND token, again an ERC-20-based crypto. Adidas tweeted about building ‘adiVerse’ using The Sandbox’s platform. SoftBank also pumped in over US$90 million in the project.

Blockchain gaming, be it in Axie Infinity, Decentraland or The Sandbox, is always underpinned by power distribution among users. This means there is no centralized authority like it exists in conventional games. Blockchain allows users to participate in the governance of the linked project by staking their tokens.

The Sandbox’s token SAND rose multi-fold in 2021, and the project is now a multi-billion dollar market cap cryptocurrency.

Enjin is a minting platform where gamers can turn their virtual world holdings into tradable assets. Enjin helps mint NFTs, which can be a revenue generating source for gamers.

Enjin also provides wallet services and has an in-house marketplace to trade tokens. The project claims to offer minting services without the user having to write any code. The network supports building websites and other software products.

Enjin, also an ERC-20 crypto token, uses Ethereum’s blockchain. The project has yet to become as big as Axie or Decentraland, but it is in the top 100 cryptos by market cap. It rewarded its backers in 2021 with a huge price appreciation.

This fifth blockchain game on the list is not as big as the above four in terms of market cap. But, it has one of the highest numbers of users in the category.

Alien Worlds has yet to become a billion-dollar cryptocurrency, but it is gaining traction. It has a unique concept where users compete with one another to be elected as ‘councilor’ of some planet in the virtual reality world. Alien Worlds allows users to own and trade NFTs, besides having the same decentralized autonomous organization (DAO) attributes as other blockchain games.

The linked TLM token of the project can be staked to participate in voting. It is also used to reward users. Alien Worlds has yet to show its true potential in terms of returns for its token holders. Despite the gains registered by other gaming tokens like AXS, TLM token has yet to exhibit a similar bull phase.

All blockchain games have at least one thing in common — decentralization of power, with users voting on critical aspects of the game by staking their tokens. Aside from this, all games have their unique virtual reality world or metaverse. NFTs, DAO and use of Ethereum’s blockchain are also shared attributes.

2021 lifted the status of metaverse tokens and took some sheen off meme currencies, thanks to Facebook plunge in the virtual reality world. What attracts users is the feature of playing and earning by converting NFTs into real world money. 2022 could be a year of even more money going into metaverse tokens.

Why Altcoins Jumped on Saturday

What we know about the PiCoin craze in Northern Nigeria

How GBR Coin (GBR) Is Revamping The Real Estate Industry

Why Altcoins Jumped on Saturday

DCU fair launch brings unique utilities, trade to earn and a blockchain with full ecosystem to the defi space