If You Invested $10,000 in Solana and Ethereum at the Start of the Year, Here’s How Much You’d Have Now

$10,000 is a sizable amount of money, but to actually get rich from an investment of that size in just one year is nearly impossible. That is unless you invested $10,000 into equal parts of Ethereum (CRYPTO:ETH) and Solana (CRYPTO:SOL) at the beginning of 2021.

The returns those tokens have delivered over the past 12 months are jaw-dropping. But zoom out, and the past few years of crypto returns have been arguably more impressive. Here’s a look at just how impactful the crypto surge has been, and what to do from here. 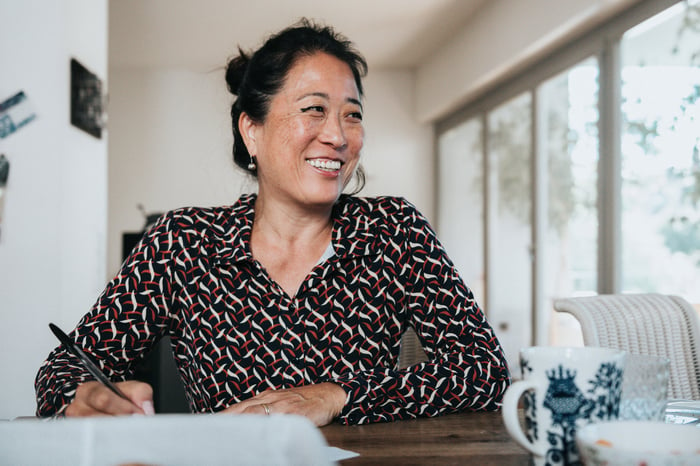 If you’re familiar with breakout growth stocks, chances are you’ve heard of the “hockey stick chart”  — a share price graph that largely resembles a fairly flat line for an extended period before bending sharply into a line that shoots nearly straight up. That’s basically what Solana did earlier this year. It’s up by about 11,800% year-to-date. Ethereum, meanwhile, is up 457.8%. 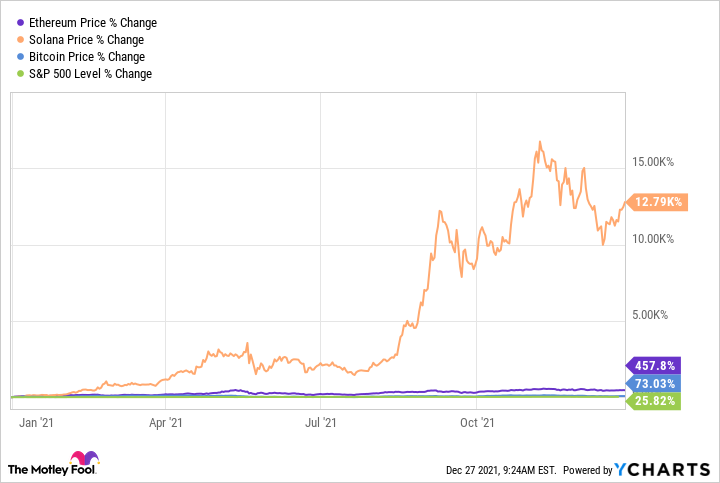 It’s easy to look at charts and shake your head at what could have been. Or kick yourself for not pulling the trigger on those purchases when prices are lower. But the reality is the crypto market is quite different today than it was five years ago. And even Solana and Ethereum have made sizable strides over the last year alone.

In the four-month period between August and November, $9.1 billion of non-fungible token (NFT) transactions passed through the Ethereum blockchain. Ethereum’s market cap is often quoted as a means of value — and yes, its market cap of $465.5 billion is an important stat. But what’s arguably more telling is the amount of money tethered to decentralized finance applications on Ethereum’s network. According to Defi Pulse, that number is just shy of $100 billion. However, the even bigger picture relates to the potential for blockchain technology to disrupt the financial sector, the healthcare sector, and virtually every sector of the economy.

Right now, it’s easy to distance yourself from the world of crypto completely. It doesn’t have to concern you because the projects aren’t affecting everyone’s daily lives yet. But 10 years down the road (or sooner), it’s easy to imagine a world where far more companies and countries carry tokens on their balance sheets, and where smart contracts and user-friendly apps commonly run on the Ethereum or Solana blockchains. It may take time, and there are likely to be ups and downs along the way, but the marketplace could very well be headed along that trajectory.

What to do now

As juicy as this year’s Solana and Ethereum gains were, they are behind us. The question for investors today is whether either crypto is a smart buy now.

Despite its potential, Solana is probably too risky for most investors. It is the fifth-most-valuable crypto by market cap. It’s an amazing solution now, but that doesn’t imply that can hold its leading position forever.

By comparison, Ethereum is the de facto No. 2 token behind Bitcoin. It could eventually pass Bitcoin as more practical applications that are tied to Ethereum’s network grow in value. Ethereum could underperform Solana. But given its track record and dominant position in decentralized finance, Ethereum has arguably the best risk/reward profile of any crypto right now — even better than Bitcoin’s.

This article represents the opinion of the writer, who may disagree with the “official” recommendation position of a Motley Fool premium advisory service. We’re motley! Questioning an investing thesis — even one of our own — helps us all think critically about investing and make decisions that help us become smarter, happier, and richer.

How to confirm receipt of Bitcoin using Electrum?

Is Ethereum a Buy in October?

How to confirm receipt of Bitcoin using Electrum?

TA- Trezor (TRB) Holds Strong Above $40, Will The Crypto Pullback Affect It?