Despite the little funding, Bitcoin is one of the most developed projects – CVBJ

The Bitcoin repository on Github is in sixth place among those that registered the most activity in 2021, despite being a collaborative project that does not have financial support from venture capitals.

According to the data collected by the CryptoMiso website, the developers contributing to the Bitcoin repository generated 2,950 consolidations, also known by its term in English «commits». This expression denotes the commit or integration of a set of code changes or optimizations.

At the top of the list are projects with institutional financing or with contributions from investors or risk capital providers. For example, the first place is held by the Trust Wallet project, a multi-currency wallet that was acquired by Binance in 2018. The GitHub repository of this project registers more than 8,000 consolidations in 2021. 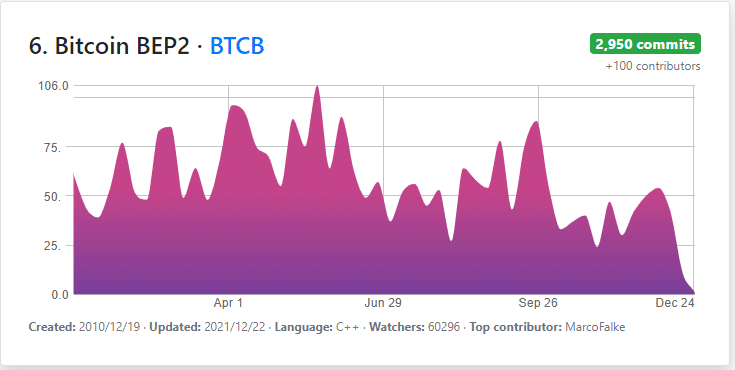 The CryptoMiso site prepares a ranking based on the activity of the projects in its GitHub repositories. Bitcoin reached 2,950 comits in 2021.

The ranking continues with the Solana and Avalanche projects. The first managed to raise capital for USD 335.8 million between 2019 and 2021, through a round of type A financing and two Initial Coin Offerings (ICO). Solana, a blockchain focused on the speed of transactions, shows 4,478 consolidations in your GitHub activity this year.

As for Avalanche, another project focused on offering a high-speed blockchain, in June this year it completed a private sale of its AVAX token for USD 230 million. Later, in November, he received another capital injection of $ 200 million, by forming his own venture capital company and incubation fund focused on AVAX. The GitHub repository for this project exhibits 3,026 consolidations in 2021.

Bitcoin advances with direct grants to its developers

Bitcoin, for its part, as a collaborative project with more than 100 collaborators contributing to its code, maintains its activity thanks to voluntary work and direct grants that some companies or institutions give to some developers.

Currently, projects like Brink, founded in 2020 by Bitcoin Core programmer John Newbery, are engaged in seeking sponsorship for Bitcoin developers. As reported by CriptoNoticias, Brink is focused on financing the security and stability of the base protocol, as well as research and development to expand its functionality. The project has received input from Kraken, Gemini, Square Crypto, and the Human Rights Foundation.

In June this year, the Gemini Opportunity Fund, the Winklevoss Brothers Exchange, allocated $ 1.5 million to support Bitcoin Core developers. Also the development fund of the Human Rights Foundation reported that it had distributed 4 BTC, more than USD 190 thousand at the current price, among some Bitcoin collaborators.

Other companies that operate in the cryptocurrency ecosystem, such as Marathon Digital and the exchanges FTX and Okoin, among others, also made financial contributions to Bitcoin developers in 2021.

Aoki, Alameda Back Algorithmic Stablecoin on Arbitrum at $200M Valuation

Is KuCoin Available in the US?

Did Satoshi Nakamoto Meet with SEC Five Years Ago?