What Is FLOW Blockchain? 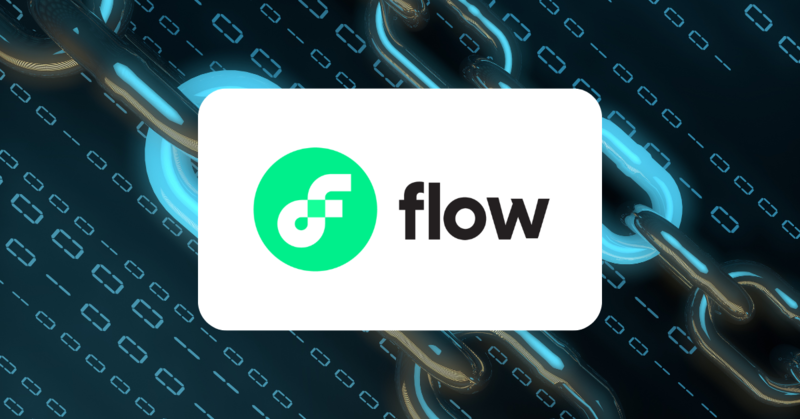 In December 2017, CryptoKitties, one of the pioneer non-fungible token (NFT) projects, brought Ethereum to a standstill because of network congestion. Then, Dapper Labs, the developer behind the project, learned about the scalability problem plaguing first-generation blockchains. With NFTs (blockchain assets representing virtual or real-world items like artwork, music, pictures, in-game items, and videos) emerging more and more popular, something needed to be done to secure their future.

Instead of migrating its decentralized app (dApp) to another existing blockchain or waiting for Ethereum to scale up, Dapper decided to develop its own highly-scalable network to satisfy their needs. That is how Flow was conceived. A high throughput and developer-friendly blockchain designed to support NFT collectibles and large-scale crypto games. Flow strives to become the vehicle for users to join the blockchain space via products like the NBA Top Shot and Laliga, where they experience memorable moments and create a new self-sovereignty.

Here is a Flow breakdown, how it works, the utility and tokenomics of the FLOW token, and its future.

What is Flow Blockchain?

Flow is a decentralized, fast, and developer-friendly blockchain designed to accelerate the growth of a new class of apps, games, and digital collectibles. Each platform feature was plotted from the ground up to provide exceptional experiences at the mainstream level. Initially developed by Dapper Labs, Flow is backed and built by a vibrant community of brands and developers.

It leverages a discrete, multi-role design focused on the intrinsic advantages of scaling without sharding (splitting a blockchain into smaller bits to distribute its computational and storage workload). The design brings multiple benefits to the Flow blockchain by increasing throughput and speed while maintaining Atomicity, Consistency, Isolation, and Durability (ACID) compliance and a developer-centric environment. Moreover, Flow is an ideal tool for developers to build revolutionary crypto-based projects.

Furthermore, Flow can help crypto users to control their data. Its consumer-friendly features are essential in inventing novel variants of NFTs and games, which you can trade on various NFT markets. Flow can also stir the creation of open economies under the control of users, adding more value. You can deploy smart contracts on Flow like you would join Lego blocks. As such, Flow is essential in developing and powering dApps, which solve the needs of billions of people globally and businesses with blockchain-based needs.

Apart from solving the blockchain scalability issue, Flow aims to address many other pain points of first-generation blockchains like Ethereum and Bitcoin. By leveraging the pipelining model, Flow offers a highly scalable, decentralized, and secure solution. Moreover, it doesn’t increase developer complexity and reliance on off-chain processes.

By discussing Flow’s primary features, we will highlight some of the solutions that differentiate it from other chains. Below are the four primary characteristics of Flow:

How does Flow Blockchain Work?

In traditional blockchains, each node keeps the complete state (wallet balances, smart contract codes, transaction fees, etc.) and executes all the activities related to processing transactions in the network. This working structure is similar to one engineer building a whole car. However, from the printed circuit board (PCB) to the central processing unit (CPU) design, pipelining is a popular method for considerably boosting productivity. The Flow network leverages pipelining by grouping validator tasks into four distinct roles: collection, consensus, execution, and verification. 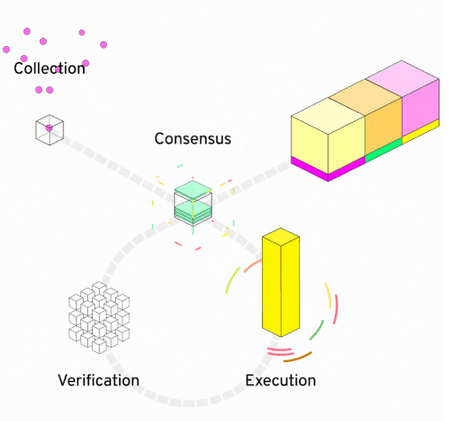 The separation of tasks between nodes is vertical (across the various validation phases for every transaction) instead of horizontal (across various transactions, like in sharding). In layman’s term, each network validator node still takes part in confirming the Flow blockchain transactions but does so only at the validation stages. Thus, they can specialize in (and significantly boost the efficiency of) their particular focus areas.

This further enables Flow to scale several times better at a minimal cost while creating a mutual working environment for all network activities. From a database point of view, smart contracts and consumer accounts on the Flow network can always interact normally in a single ACID transaction. This guarantees excellent user experience and complete composability, allowing developers to seamlessly build on each other’s work.

Most blockchain scalability solutions propose fragmentation of blockchains into inter-connected chains or shards, though side chains still face similar problems. As such, these solutions eliminate ACID guarantees popular in most databases. However, eliminating ACID guarantees makes creating an app that draws data from multiple fragments complex and unreliable.

Moreover, interactions between protocols become so difficult that even separate large-scale use cases turn to complex techniques to scale across shards because of latency problems and higher transaction failure rates. This radically restricts the types of use cases possible on the blockchain and their chain impacts. Therefore, sharding transfers the toughest part of blockchain scaling to application developers instead of solving it at the protocol level.

For example, a basic user action, like buying a hat for a CryptoKitty using USDT, requires 12 transactions and seven blocks on a sharded network. On the other hand, in an unsharded, ACID-based blockchain like Flow, the same activity, or even a more complex one, can be a nearly-instant transaction under one block. Besides the extra time and costs associated with sharded blockchains, it’s more difficult to design, analyze, and improve source codes on such chains.

The major insight that birthed the Flow architecture is that it’s possible to separate non-deterministic activities from deterministic ones and allocate each to various nodes based on their technical abilities. This significantly improves the network throughput and solves multiple consumer and developer experience issues with traditional blockchains.

In that regard, Flow pipelines the task of a miner or validator across four major roles that require staking:

FLOW tokens come with multiple features that make them a strong competitive edge over other native tokens for blockchain gaming platforms, including:

So, how does FLOW obtain value?

You also need some FLOW tokens to perform tasks on the blockchain – from transferring assets to interacting with smart contracts. FLOW coin’s prevalence in the ecosystem makes it the ideal “bridge currency” for currency swaps between low-liquid token pairs. It’s projected that as the number of secondary tokens on the Flow network increase, the trading pairs will also surge exponentially, implying that some trades may need an intermediary asset such as FLOW.

FLOW’s market value is affected by various factors, such as utility, the popularity of the NFT marketplace, developments, regulations, partnerships, and other market events. The intrinsic value, which mostly doesn’t align with the market price, is influenced by the technology scale, technical capacity, functionality, and applications.

The Flow blockchain leverages a PoS mechanism and a multi-node architecture to obtain consensus. The PoS mechanism allows FLOW holders to stake their tokens and generate passive income by running validator nodes or delegating their tokens to a recognized node. Flow node operators charge a commission of 8% from users who delegate to their node.

Flow sets a certain percentage of the total FLOW token supply yearly as rewards to validators through inflation and transaction fees. The total reward is chosen prudently to be as small as possible (currently 3.75% of the total supply per year) while upholding the security of the blockchain. High inflation can cause unintended effects and make FLOW less appealing for non-staking applications.

To ensure stakers are incentivized to take up the much-needed validator roles, the total rewards allocated to every role are modified via a set of multipliers called reward coefficients. The Flow smart contract adjusts the values automatically. For example, if a certain role is regularly under-staked than others, the contract increases the rewards for that node until it attains an average staking balance.

The graph below shows the initial allocation between node pools. 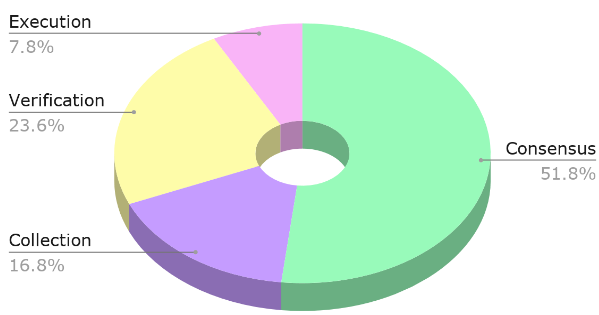 FLOW as a Governance Token

During the first year of operation, the network development efforts were distributed across decentralized autonomous organizations (DAOs), which required participants to hold some FLOW tokens to qualify for voting.

With time, the Flow community was required to define and offer feedback regarding network improvements, facilitating on-chain governance. There are three types of decisions achieved through the Flow governance model:

Though these five stand out as Flow’s most notable projects so far, the network boasts a flourishing consumer-based ecosystem that is steadily growing and producing promising and unique crypto projects. In August 2022, the social media giant – Instagram – added support for NFTs minted on the Flow network as part of its NFT expansion efforts. Let’s look at a few examples of marketplaces, DeFi apps, and developer tools built on Flow. 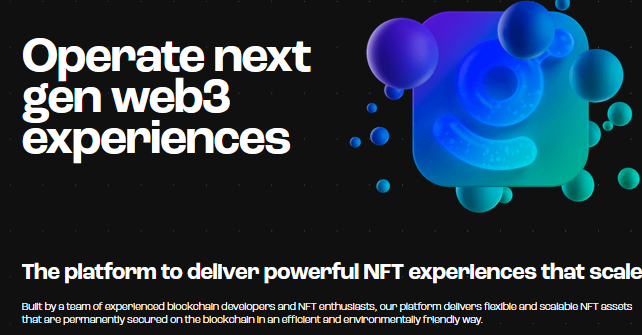 GigLabs links top brands with thrilling user experiences by offering the tools to design, mint, and trade NFTs. The GigLabs NFT Bridge is a gateway to the cryptocurrency space, providing all the tools necessary to mint, list, issue, and trade an NFT. This project is unique because brands can entirely customize the NFT markets to meet their specific consumer needs. 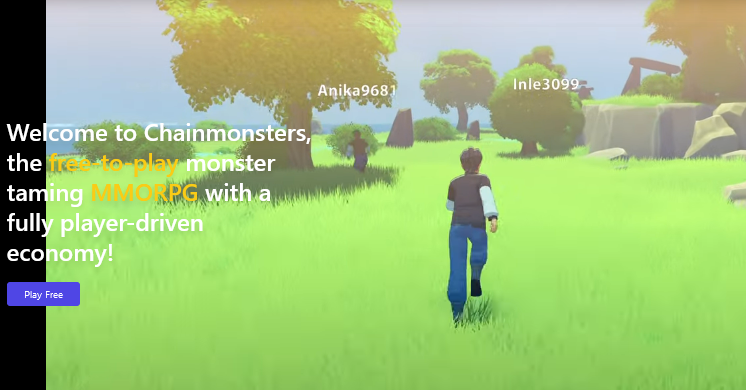 Chainmonsters is a free-to-play blockchain game with a player-centric economy where players seize, coach, fight, exchange, and breed characters (Chainmons). You can play the game individually or join other players in selected group missions to earn rewards. Breed variants, environmental impacts, mutations, and other characteristics give Chainmons their exclusive likeness – after all, they are NFTs with distinct characteristics. 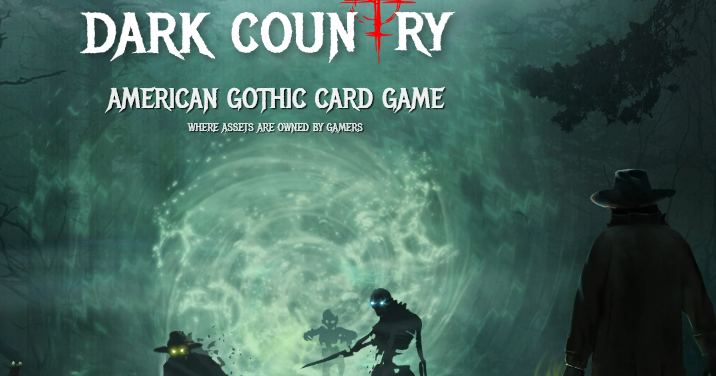 Dark Country is also a free-to-play, cross-chain NFT trading card game where you can gather cards to buy land, build, go on vacation, and even fight with other players. The cards in this game are NFTs owned by players and can be swapped in-game or on NFT marketplaces. As a traditional card game player, you will realize some striking similarities between standard card games and Dark Country. Magic inspired the Dark Country developers, The Gathering and the game has features of physical card collection, though it’s a blockchain-based game.

Flow is a decentralized, high-throughput, and developer-friendly blockchain designed to accelerate the growth of a new class of apps, games, and digital collectibles. Dapper Labs has undeniably expanded upon its NFT offerings since the epic breakthrough of CryptoKitties in 2017. As NFTs and blockchain games go mainstream, Flow has positioned itself well to revolutionize them further.

To learn more about cryptocurrency and DeFi protocols, check out CoinGecko Learn.

Cadence is a resource-intensive programming language used by Flow developers. It ensures that the source codes are safe, clear, and easily understandable.

Flow Playground is basically a learning environment for developers to create product prototypes. Remember, anyone can learn blockchain programming, build crypto projects, mint NFTs, and trade them on various marketplaces.

Where can I buy FLOW tokens?

You can buy FLOW tokens from various exchanges, such as DIgifinex, Binance, Kraken, and more. Visit CoinGecko token page to learn more about FLOW and its tokenomics.

How do you stake FLOW?

You can stake FLOW tokens and generate passive income by running validator nodes or delegating your tokens to a recognized node. To delegate a node, you simply identify the node ID you are interested in and the number of tokens you wish to delegate. Your stake will be committed and managed similar to other staked tokens. Remember, you can stake FLOW tokens through the Flow Port or custody providers, like Binance and Coin List.

Josiah is a tech evangelist passionate about helping the world understand Blockchain, Crypto, NFT, DeFi, Tokenization, Fintech, and Web3 concepts. His hobbies are listening to music and playing football.
Follow the author on Twitter @TechWriting001

SEBA Bank To Include Ethereum Staking In Services

Many Believe the Future of Blockchain and AI Will Likely Be Intertwined. It’s Important … – Latest Tweet by Binance Coin

SEBA Bank To Include Ethereum Staking In Services

Ethereum devs confirm the perpetual date for The Merge By Cointelegraph

How Summer Is Turning Into A Short-Lived Altcoin Season